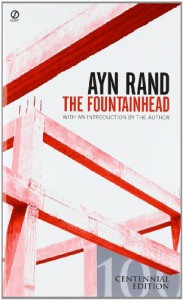 I've avoided reading the books of Ayn Rand for many years, but thought I would give this work a try. I was pleased to find that the story was much more interesting than I anticipated. I found myself really admiring the structure of this work. She breaks it into four distinct parts that follow various central characters. The nice thing about a novel of this length, that follows people over many years of their lives, is that the the length mirrors that scope, giving the reader some sense of the time that has passed. This allows for all sorts of emotional content that shorter works either lack or handle badly.

I also found that the objectivist philosophy at the heart of the book didn't bother me very much. I'm about as altruistic as they come. I don't think high school English teacher would qualify me as a "creator," but probably a "parasite" instead. None of it ruffled my feathers. I can see Rand's point, and I agree with her that subjugating the individual will is not usually a desirable thing (unless I'm meditating). I feel like Rand looked around at society and saw people giving their power away left and right, making themselves small, not living to their potential. She had good, noble intentions in mind, and it's hard for me to dismiss someone with good intentions. She is not advocating any sort of government or political system. She is advocating individuals working to their greatest potential.

My one real issue is her handling of pity, of charity, of the sick and enfeebled. There's a frightening tendency in the book to characterize people with disabilities as repulsive creatures. The part, for example, where the Stoddard Temple is given over to becoming a home for the disabled is written as if this is the loathsome antithesis of great achievement. However, Rand was little different than most people of her time in these characterizations. Only in recent years have people started treating the disabled as something more than subhuman.
472 BOOKS