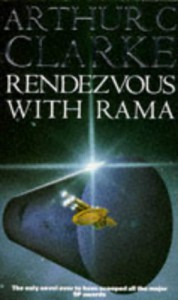 Has this ever happened to you?
I read a book called Sphere by Michael Crichton several years ago, which although marred with silliness had some spooky atmospherics to gird its overall impact. Now having read Rendezous with Rama, I find out that Crichton stole all of my favorite elements of that novel from Arthur Clarke! And so a little bit of mental recalculating now takes place within my brain. Clarke stock up, Crichton stock down.

Anyone who has read a good amount of Clarke knows he has a very particular style. I'd like to think that I could guess his authorship if given an anonymous science fiction novel to peruse, just as I might have that ability with Heinlein, Dick, and Asimov. With Clarke, you have a creative imagination at work, but one that operates under the parameters of scientific plausibility. There's a moderate, controlled, methodical nature to his plots and prose. Logic and even-mindedness are prized among his wooden, humorless protagonists, for Clarke is not one to endow his characters with those endearing idiosyncrasies that we often find in other work. He loves to write a book in which a great mystery is unveiled to human characters and then proceed to observe those characters seek out answers and solutions. His stories hint at an optimistic mind. He believes in the power of human beings to enact goodness and progress, even in the face of our petty instincts. Sadly, I find in reading novels that that predilection is becoming more and more rare.

Rama is recognized as one of Clarke's best stories. I highly recommend it to fans of solid science fiction.